There are some cons though. The most important one is performance degradation. Akumuli in WAL mode have to do some extra job. Every data point have to be logged and WAL volumes have to be rotated from time to time. I don’t want to go into details to much (wait for the next post) but you should know that WAL have to be updated more frequently than main storage and the data in WAL is less compact.

I decided to measure the difference between Akumuli with and without WAL. Here is my test setup!

Both droplets have 6TB of transfer which is enough for the test.

All benchmark code lives in this repository. To generate the data you have to clone it and run bash gen.sh. This script generates 6 gzip archives with test data in Akumuli format (the one that is normally used for ingestion). It takes many hours to finish and uses 222GB of disk space. This dataset should contain ~60-billion data-points from ~350000 unique time-series. 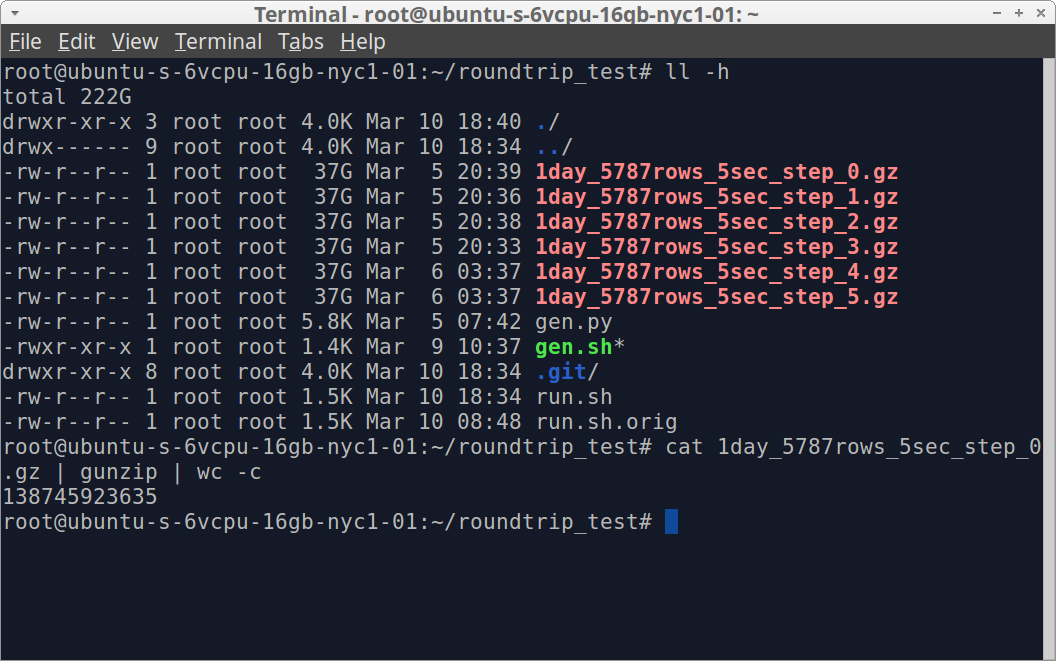 On the target machine I installed Akumuli from the package repository. Then I configured it by running akumulid –init and editing ~/.akumulid configuration file. First of all I increased number of volumes to 20 (to use 80GB of disk out of available 100GB) and commented [WAL] section and all its elements. After that I created the database by running akumulid –create and started the server by running akumulid.

To run the test ssh to the load generator and run bash run.sh. This script does two things. First of all it send data from every generated file to the Akumuli instance on the target machine in parallel. This is why 6-core droplet is needed. The data is sent via a bash itself using this syntax:

Note that this command send uncompressed data so the actual transferred volume was not 222GB but close to 775GB. The second thing script does happens when all data is sent. It queries Akumuli instance on the target machine trying to fetch last data-point it had sent. It’s needed to make sure that all input was processed by the database server.

When run.sh finished I recorded the results, reconfigured target machine by resetting the database via

and uncommenting the [WAL] section in the configuration file. After that I started akumulid on the target machine and run.sh on load generator.

And here is the second one (with WAL).

You can see that all graphs are somewhat close. Test duration was tad longer in the second run. And the Disk I/O graph is the most interesting one. It clearly shows that second run was writing more data.

The results are very predictable. I had the same close to 20% slowdown on my laptop with WAL enabled. But considering the overall performance the impact is not that big. In software engineering, performance was always traded for variety of good things like security or durability. Given the fact that Akumuli scales with added CPU-cores almost linearly and that every CPU-core gives you extra +1M writes per second the choice could be easy.